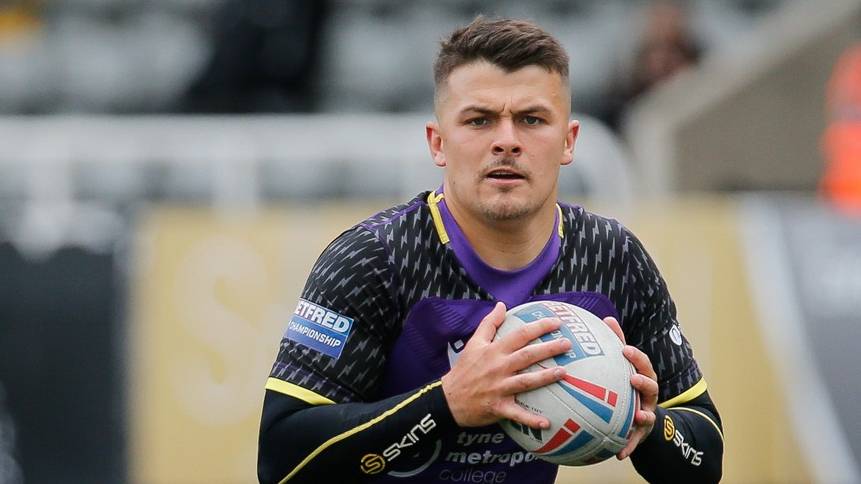 Newcastle Thunder came away empty handed from the Betfred Championship trip to Odsal Stadium on Sunday afternoon, but a determined performance against an in-form Bradford Bulls will give hope for the remainder of the season to come.

Facing a side unbeaten in the league since the opening day of the season, Thunder matched their hosts set for set and point for point in the opening 40 minutes, but were left to rue quick fire tries at the start of the second that laid the foundations of the Bulls seventh straight win

It was a nightmare start for the Tynesiders as they conceded a try off the host’s first attacking set, having gifted Bradford possession after putting a fifth tackle kick out on the full.

Starting from Thunder’s 40 meter line, the Bulls won back possession off their own last tackle kick and were able to feed Jordan Lilley, who then wrestled his way loose in the tackle to position himself to ground the ball.

Bouncing back from that setback Newcastle forced Bradford into a series of errors and concessions of penalties to enjoy a spell on the front foot, a  spell that resulted in an equalising score 15 minutes in thanks to the opportunistic efforts of half-back Reece Dean.

Opting to keep playing on the fifth and last tackle, a series of short pop-passes allowed Newcastle to create a gap in the Bulls defence that Dean spotted and put a well weighted kick into that he was able to gather, score and then convert.

Dean was at the heart of some excellent tactical kicking during the half too, that allowed Thunder to make the most of high set-completion rates and keep the Bulls at arm’s length and though they were creating opportunities, the final killer blow was proving elusive.

Having gone in all square at half-time, a fired up Bulls charged into a 12 point lead after the break with two quick-fire converted tries in the opening five minutes through Ellis Robson and Ant Walker as they made most of opportunities that were presented.

Thunder weren’t going away though and shortly after, were back to just a one score deficit thanks to Kieran Gill.

Playing in the pack following the late withdrawal of Sam Wilde, the try-machine crossed for his eighth of the season after a series of quick play the balls and direct carries saw Thunder carve their way up field with ease, with Bob Beswick lay on a superb scoring pass.

With the game finely poised, Bradford opted to drop a goal with less than fifteen minutes to go to allow themselves some breathing space, but Thunder stuck to their task and continued to threaten, leaving the hosts anything but comfortable as the game entered it’s final stages.

Sadly for Newcastle though it was Bradford who ended the stronger, with another brace of converted tries in the final six minutes from Steve Crossley and Tom Doyle allowing them to secure a win that was far less straightforward than the scoreboard suggested.