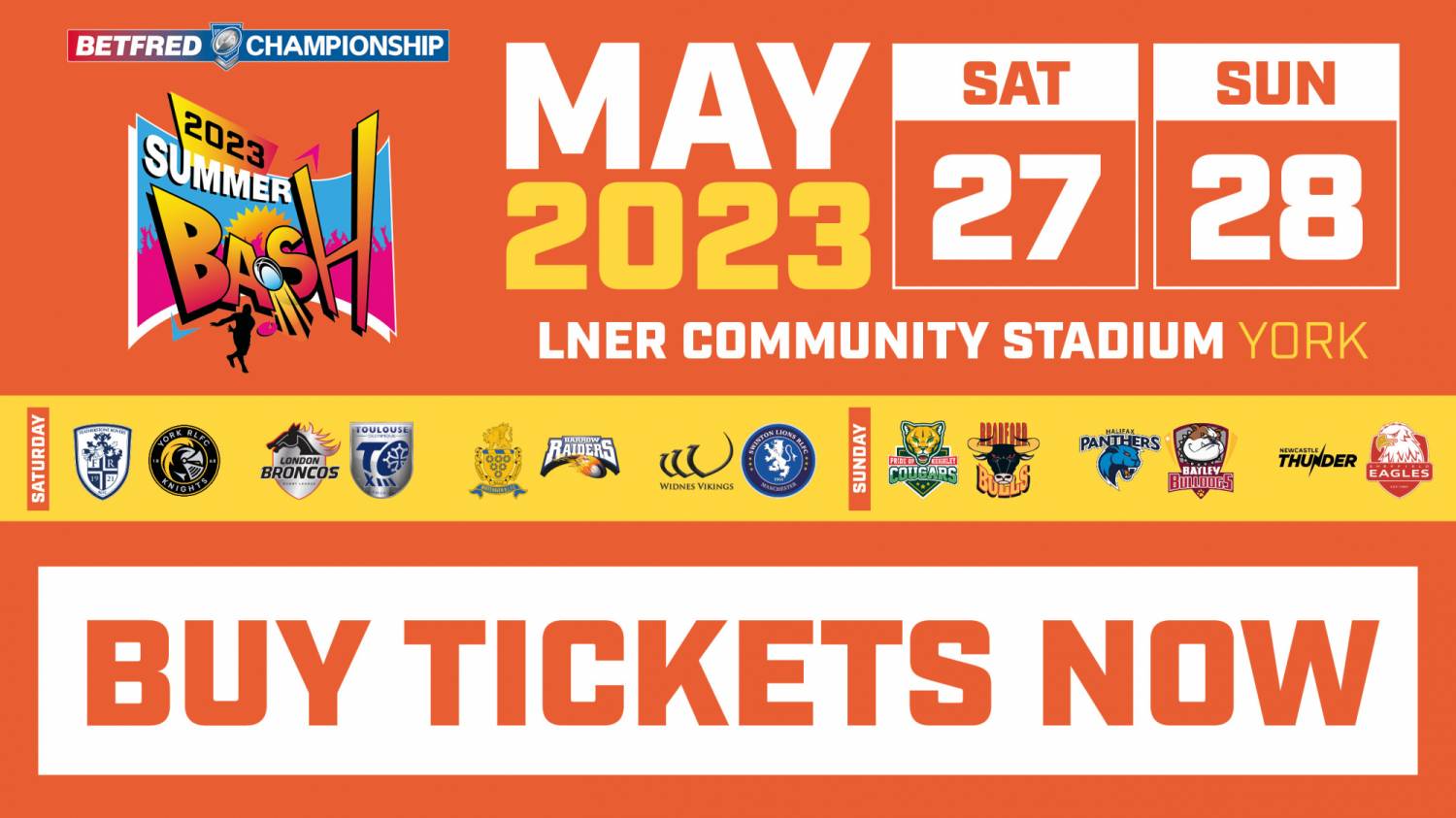 The 2023 Betfred Championship Summer Bash is heading to York.

The historic Minster city has been selected as a new venue for the seventh Summer Bash – which will be held on the Spring Bank Holiday Weekend of May 27-28, at the LNER Community Stadium.

Tickets go on sale today, and demand is expected to be high for the 8,500 capacity venue, with an attractive line-up of fixtures – and only two of the seven Championship games confirmed for live coverage by Viaplay Sports.

Both those fixtures are scheduled for Saturday May 27, with Toulouse Olympique taking on London Broncos in a big-city clash, and Featherstone Rovers facing York Knights in a match which should generate an electric atmosphere, as Featherstone’s flatcappers make the short journey to face the Knights.

The other games scheduled for Saturday see John Kear’s Widnes Vikings taking on newly-promoted Swinton Lions, and an all-Cumbrian affair between Barrow Raiders and Whitehaven.

Sunday will see a new local derby for the Bash weekend as Keighley Cougars, making only their second Bash appearance and their first since 2016, take on their big-city neighbours Bradford Bulls.

There will be a strong West Yorkshire theme as the Halifax Panthers and Batley Bulldogs take their rivalry to York for the first time, while Newcastle Thunder and Sheffield Eagles will travel south-west and north-east respectively to meet roughly in the middle.

Sunday’s line-up will be completed by a Betfred Women’s Super League clash between the rebranded York Valkyrie and Warrington Wolves – meaning that a York team will be in action on each day of the weekend.

Mark Foster, the RFL’s Chief Commercial Officer, said: “The LNER Community Stadium and the city of York are exciting new venues for the Betfred Championship Summer Bash in 2023.

“York has been a key venue through the Rugby League World Cup, including staging a superb event for the Women’s Semi Finals with a record rugby crowd of more than 7,000, and as a popular base for a number of teams.

“There will be a fresh feel to the Bash in 2023, with the return of Toulouse Olympique, Swinton Lions and Keighley Cougars whose derby match against Bradford Bulls promises to be one of the highlights of the weekend.

“We are also delighted to include a Betfred Women’s Super League fixture in the programme, reflecting York’s rapid progress in the competition in recent years, and also Warrington’s success in earning promotion to the top tier.”

For Season Ticket Holders of Championship clubs, tickets are available direct from each club at 50% off full price, with Day tickets from £10 Adults and £5 U16s and Weekend tickets from £17.50 Adults and £8.75 U16s. Newcastle Thunder season ticket holders will receive a call from the ticket office and a link to book their tickets.

Anyone still looking to purchase their Newcastle Thunder can purchase online here from just £99 per adult and £10 per U16.

You can also purchase general sale tickets through the RFL here.

The Summer Bash was first played in 2015 at Bloomfield Road in Blackpool which remained the venue until 2019. It has not been available in 2022, when the Bash was played at Headingley, or in 2023, hence the move to York.