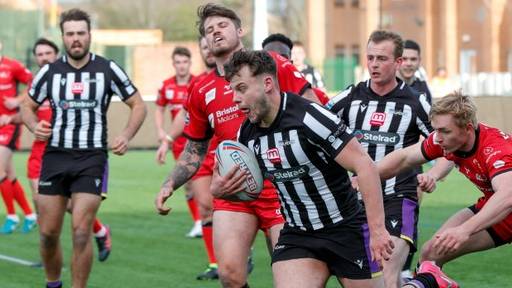 Newcastle Thunder played out a thrilling draw on their return to the Betfred Championship on Sunday evening, as they battled back from a 14-point half time deficit to tie with Widnes Vikings 30 all.

Quick fire tries from Connor Bailer, Jack Johnson and Kieran Gill gave the hosts a share of the points as they showed determination and skill to cap a well-deserved fightback that, but for a strong gusting win playing havoc with kicks at goal, could possibly have been a memorable win.

It was an action-packed opening half with both sides attacking and scoring at will, with eight tries in total but importantly five of those went the way of the visitors.

Newcastle made the dream start to their first Championship game since 2009 with the opening try after just two minutes, as centre Kieran Gill took the ball at pace and rode out the Vikings attempted tackle to crash over from close range.

The hosts were given a repeat set from the kick off as Widnes misjudged a traditional Kingston Park gale and put the ball out on the full and gained significant territory as on-loan hooker Connor Aspey made a great break and showed great strength in the tackle to make a full 40 meters.

The Vikings however made the most of the opportunity afforded for a well placed 40/20 kick that gave them possession 15 meters from the Newcastle line and a set from where they opened their account, through a converted try from Jack Owens.

Having taken the lead, it was quickly extended as Newcastle conceded a penalty for a high tackle that gave possession back to the visitors, from which Matt Cooke was able to work himself free of the attentions of the home defenders and ground the ball from close range.

After an extended period in defensive mode, a pair of penalties against the Vikings allowed Thunder to relieve the pressure and on their next foray into Widnes territory, hit back with a well worked try for Sam Wilde.

On the front foot for the first time since their opening score, Newcastle took full advantage as Josh Woods played a beautiful short ball to the on-rushing Wilde who sliced through the gap for a converted try that took the score to 10 – 12

Another offside penalty ensured that the gap was quickly re-established as Widnes were again able to make the most of an error from the hosts, with Matty Smith firing out a pinpoint pass to Deon Cross for his second try of the day.

A penalty goal made it an eight-point lead before Newcastle clawed a try back through Ukuma Ta’ai after a superbly placed pass from Jake Shorrocks opened up the line, but it was only a temporary erosion of the lead as Shane Grady responded for the visitors on the next set.

The end to end nature continued as Thunder’s Jack Johnson was denied twice in quick succession before Widnes scored a superb length of the field try as Jack Owens was set away for a try that gave Widnes a 14-point half time lead.

They opened the second half strongly and forced Newcastle into facing a repeat set as the attacked with purpose, but were unable to work a try despite stretching the Thunder line.

Neither side were able to work much in the way of attacking opportunities after that initial period, as both sides gave up possession with handling errors  though Thunder did go close through Johnson and Matty Wright,  but were shepherded into touch on both occasions.

Both sides were reduced to 12 men with 15 minutes to play after Eribe Doro lashed out at Nathan Wilde following a dominant tackle in midfield and the Thunder man retaliated.

It was the moment that sparked the crucial renaissance in the hosts, as they gained a foothold in Vikings territory and they deservedly scored the first points of the half through Connor Bailey.

Looking to work the ball wide a Widnes hand touched the ball in flight to give Newcastle a free shot at the tryline where Alex Clegg was unlucky to be adjudged in touch though it proved immaterial as Bailey was worked into space on the next tackle.

Johnson’s acrobatic leap in the corner made it a four-point game and with the clock running down, the winger played a sublime scoring pass to Gill who finished the day the way he started, with his strength securing four important points.