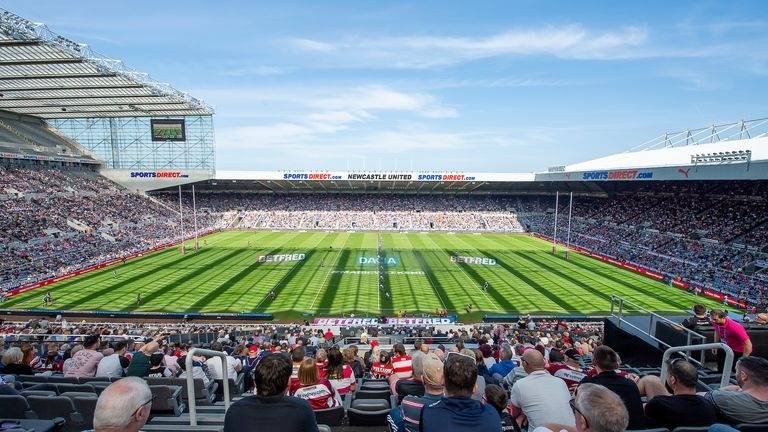 Rugby League reasons to be excited for 2022, coming your way between July & October

The 2022 rugby league season is shaping up to be one filled with thrills and excitement with plenty for fans in the north east to look forward to.

From the return of the Magic Weekend in July, to Thunder's first appearance at the Championship's Summer Bash and the eagerly anticipate Rugby League World Cup, these are our pick of the highlights fans should be excited about from July to October.

Super League’s big weekend returns to the north east in 2022 with St James’ Park hosting its six iteration of the popular round of Betfred Super League fixtures over two days.

Moving to the start of July on Saturday 9th and Sunday 10th, there will be the usual mix of top-flight action, fan zones and a carnival atmosphere for the summer jamboree.

Newcastle Thunder will once again look to provide a curtain raiser to the top-flight action, with the club’s Betfred Championship fixture against Bradford Bulls coinciding with the Super League showcase at the home of Newcastle United.

Having welcomed their biggest crowds at Kingston Park at games held over the Magic Weekend in previous seasons, the club currently exploring how best to ensure another bumper crowd.

Full details of the date, time, venue and ticket prices for the Bradford clash are expected to be confirmed shortly.

Returning after two years of enforced absence through Covid, the Championship’s version of the Magic Weekend takes place over the weekend of July 30/31, with a full round of fixtures held over the two days.

Traditionally held in Blackpool the 2022 version will have a new home due to the unavailability of Bloomfield Road, with the venue due to be announced soon.

With the event missing from the calendar in 2021 it will be the first time Thunder have been involved, with opposition and game date also due to be announced shortly.

Full details of ticket packages and official club travel will be communicated early in the spring.

Taking place at Barnard Castle School, the camp provides a great opportunity for experienced rugby players to hone their skills over a week-long residential.

Throughout the week, participants will receive 5 hours of coaching per day, working on team skills, individual skills and game management, as well as principle of attack and defence.

Delivered by Newcastle Thunder Community Development and academy coaching staff, as well as special guest visits from Newcastle Thunder director of rugby Dennis Betts and first team players, to give participants hints and tips on the reality of professional sporting life and how to make it to the top in the rugby world.

For only £300, the camp runs from Monday 15th August until Friday 19th August 2022, and includes three meals per day plus supper, accommodation, Newcastle Thunder clothing, and Thunder community coaching

As the regular Betfred Championship season heads towards its climax, York City Knights will head to the north east for a now traditional Friday Night fixture against Newcastle Thunder.

All but one meeting between the sides at Kingston Park Stadium have been played under floodlights, adding an extra element to the atmosphere as the near-neighbours battle it out for league points.

It’s a fixture where enhanced hospitality and match-day experience will be in place, with details to be confirmed later in the year, along with a big focus on getting groups from local rugby clubs, community groups and business in for the game.

With both sides being tipped by pundits as contenders for the end of season play-offs, it could prove to be a blockbuster night that no fan of sport or drama will want to miss.

After the Betfred Championship season is over, the attention of the rugby league world will focus even more keenly onto the UK, as the Rugby League World Cup kicks off in the Autumn,

The most inclusive tournament to date with the men’s, women’s and wheelchair competitions taking place at the same time, there will be heavy interest in the north east with five men’s games being held in the region.

The competition kicks off at St James’ Park on Saturday 15th October when England take on Samoa (KO 14:30) before Kingston Park hosts its first game of three on Sunday 16th.

Scotland face Italy as the home of rugby league in the north east makes its international bow, before Fiji take on the Azzurri face Fiji on October 22nd and the Bravehearts face the Pacific Islanders on October 29.

Tickets for the games are on sale now and with former Thunder-man and local star Sam Luckley a firm fixture in Scotland squads, there will be plenty for north east fans to support in games at Thunder’s home.

For more details on the competition and to book tickets, click here.