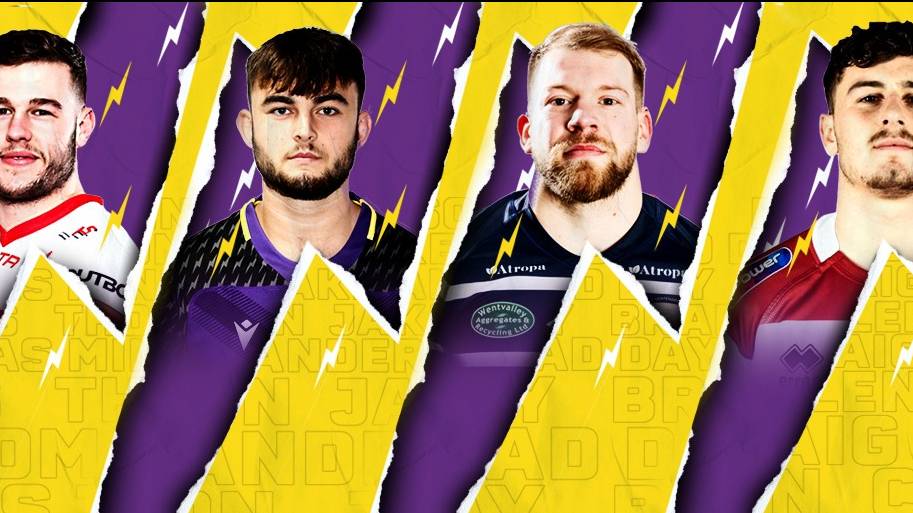 Newcastle Thunder has confirmed the identities of four new signings ahead of the 2022 Betfred Championship its exclusive season launch event.

Joining from Featherstone Rovers, Day has been a keystone in James Webster’s since moving from Batley ahead of the 2019 season, featuring in 29 matches in his first season and scoring 13 tries.

After starting his career with Castleford Tigers, Day has featured in over 100 Betfred Championship games with the Bulldogs and Rovers, scoring 42 tries since 2015.

The former England youth international has been tipped as a Super League quality forward and will bring added physicality to the Thunder pack for the coming season.

Also making the switch from the Millennium Stadium is centre Minns, who is a product of the Leeds Rhinos academy and made his senior debut for the Headingly club aged 19 in a 42 -24 win over Castleford.

Making a total of 51 career appearances in the top division with the Rhinos, London Broncos and Hull KR, Minns career tallies extend to over 100 professional games and a half century of tries.

Away from the field, Minns is a strong advocate on mental health matters and delivers motivational speaking around the subject via his eponymous company Minns Mind.

Craig Mullen is the second new face to be added from a Betfred Super League following the signing of Alex Foster, with the 23-year-old moving from Leigh Centurions.

A product of the Wigan Warriors academy, Mullen signed for the club aged 14 and made his Super League debut for the Cherry and Whites at Wakefield in May 2018.

Joining the Centurions ahead of their late promotion to the top flight last December, Mullen made 12 appearances in 2021 and demonstrated his versatility as he featured at fullback, centre, wing, half back and scrum half.

His precise goal-kicking played a crucial role in Leigh securing their first win of the season against Salford Red Devils, with 16 points from his boot propelling the side to a 32-22 win back in August.

A player with experience of both the Betfred Championship and League 1 through loan spells with London Skolars, Swinton Lions and Leigh, Mullen is an exciting English talent that Thunder are pleased to secure.

Completing the quartet of new signings, Jake Anderson becomes the latest local talent to graduate from academy to first team, after the 18-year-old impressed in four outings during 2021.

As a result, the Gateshead born forward who is a product of community club Gateshead Storm and who has been a regular feature of England youth setups, will now be part of the club’s full-time roster.

Speaking about the new additions, head coach Eamon O’Carroll was fulsome in his praise of the players he is bringing in to his 2022 squad.

On Brad Day: “Brad brings strike on an edge, is competitive in what he does and will add some real threat.  He’s a player that can really excite fans and gives us some good experience and some skill.

“He has been one of the best in the Championship over the last couple of years and we have done really well to get him against some strong Super League interest.”

On Tom Minns: “Tom brings a different dynamic and I’m really looking forward to working with him.  He is a resilient character and is really passionate about coming here and making this club his own.

“He is really good defensively and also has some strike in him and is going to add to us as one of the on-field leaders and we’re going to be open to some of the ideas that he is going to bring to us.

On Craig Mullen: “Craig is a versatile player and that is something that has probably been unfortunate for him in that whatever position you put him in, he does a really good job.

He is coming here as a out number one fullback and that excites both him and me. He is a smart player; he organises the defensive line and has a high level of skill which is going to complement our edges.

On Jake Anderson: “Jake was fantastic and had he not got injured, he would have played more games last season as well. He is really passionate about being a Super League player for Thunder and I am really excited to work with him.

“He’s a level-headed kid who comes from a great family. He knows he has a lot of work to do, but I’ve probably got a little bit of a soft spot for him, as a fellow front rower so I’m happy I am going to be part of a journey that is no doubt going to be successful.”

The quartet join Alex Foster and Ukuma Ta’ai as the signings so far confirmed for the 2022 Betfred Championship season, with more signings and re-signings due to be confirmed in the coming weeks.

Season ticket memberships to see the team in action will be on sale from Friday 22nd October by clicking here, with full details on the packages available here