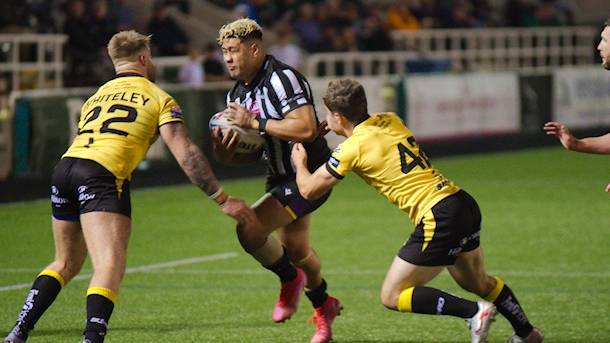 Newcastle Thunder and York City Knights served up an entertaining precursor to the Dacia Magic Weekend on Friday evening, but it was the visitors who took the spoils with a 16-29 victory at Kingston Park Stadium.

The Knights made the most of a strong first half to avenge their home loss to Thunder earlier in the season, though Thunder made a game of it with a strong second half showing.

York made all the running in opening minutes with an early knock-on from Thunder giving the visitors a platform from which to apply plenty of early pressure.

After forcing an early repeat set and then being awarded a penalty for a Newcastle offside, a short pop pass close to the line fed Chris Clarkson for an opening converted try after just five minutes.

Slipping out of the tackle, the winger accelerated away for an almost length of the field effort, with enough space to go in under the posts and give the simplest of conversions.

Having gone close to scoring before that second York try through Kieran Gill, Thunder made the most of forcing a knock-on from the Knights by making their first impression on the scoreboard through Alex Clegg

Getting the line moving at pace the ball was worked right, with soft hands from Matty Wright laying on a superb pass to the winger allowing him to cross in plenty of space.

A missed conversion from out wide made it an eight point lead that York enjoyed, but back to back tries for Aiden McGowan gave the Knights a commanding lead by the half hour.

The first came from a slippery run in the midfield that opened up the gap for him to cross under the posts moments after coming on to the field.

A break down the right off the restart saw the visitors surge forward, with the ball fed back in side, before McGowan scooped up a bouncing ball for an unopposed walk in.

Another knock on was where Thunder were able to create their second score of night on the stroke of half time and it came through the familiar combination of Josh Woods and Jack Johnson.

Creating numbers out wide, the looping floating pass from the half-back was as usual perfectly placed for the winger to gather and dive in at the corner.

The hosts made a promising start to the second forty as they forced an early repeat set following that penalty but the Knights were able to defuse the threat by forcing a knock on.

Thunder though were enjoying the best phase of the game and took the reward that their efforts deserved on 50 minutes through Kieran Gill.

Again, it was good hands along the line that got Thunder moving, before a delayed pass opened up the space for  the centre to stroll through for his 13th score of the season.

Woods conversion made it an eight-point gap that Thunder were chasing and the hosts had their tails up with a break from Johnson and a fielding of a bouncing ball on a fifth and last y Ukuma Ta’ai only just seeing Newcastle stopped short.

That missed moment though proved pivotal and the Knights were able to arrest Thunder’s building momentum through Perry Whiteley, after they forced Newcastle into touch as the attempted to run the ball back at pace.

Thunder were grateful to Ukuma Ta’ai for a try-saving tackle on 70 minutes as York probed the centre of the park, but the Knights effectively sealed the result with a Matty Marsh drop goal seven minutes from time.

Newcastle mustered a final charge in the dying embers of the half and looked to have stolen a score after a ricocheting ball bounced around the in-goal area, but a player coming in from an offside position allowed the Knights to clear their lines.