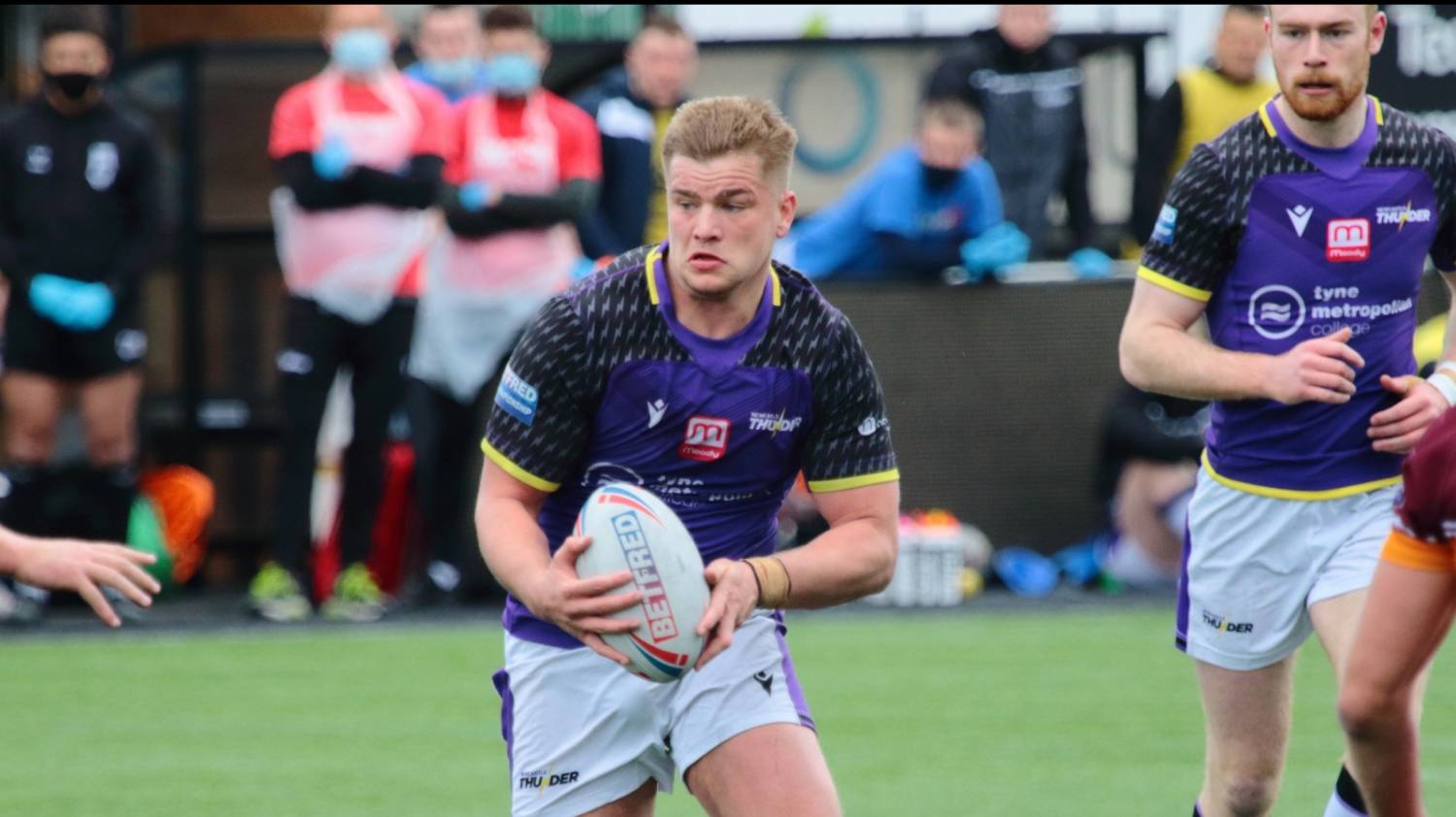 Newcastle Thunder were left to rue key errors at pivotal moments at Kingston Park Stadium on Sunday lunchtime, as they fell to a 28 – 16 loss to Batley Bulldogs in rugby league’s Betfred Championship.

A mis-firing display meant Thunder were unable to build on their excellent performance against Sheffield Eagles a week earlier and the Bulldogs take a third win in four games to maintain their impressive start to the season.

After a tentative start where both sides enjoyed a 100% completion rate, it was the visitors who took charge of the game, enjoying long periods on the front foot as they frequently challenged the Thunder defence.

Encouragingly for the home side, their line was proving to have the answers they needed to keep the Bulldogs at bay, that was until the eighth minute when Elliott Hall got Batley off the mark.

The fullback gathered a Tom Gilmore chip perfectly after the half-back spotted a flat Newcastle defensive line for a converted try that was well taken and created.

After the hosts handed over possession with a penalty for a rip in the tackle after responding well, the Bulldogs worked their way through the tackle count to get within 15m on the Thunder line from where a pair of Newcastle mistakes allowed Batley to set up camp and keep the pressure on.

With their defensive efforts keeping the visitors to that opening score, a penalty for high shot allowed Thunder to clear lines before a second allowed Josh Woods to drill a kick to 20m out from the Batley line where in the following set Kieran Gill got the hosts off the mark.

Reading the play superbly, Josh Woods saw space out wide as his short ball options were cut off, putting in a superb floated pass to the wing, which Gill gathered in for the equalising score.

That was quickly cancelled out with a mistake at the restart as Batley made the most of the strong position they were gifted as Dale Morton restored the lead.

Set up by a strong carry from Michael Ward which opened up space out wide, simple passes down the line gave the winger the chance to cut inside and exploit the gap for an unconverted score.

Thunder needed a quick start to the second half to arrest the momentum being built by the Bulldogs, but it was Craig Lingard’s men who extended their advantage with just five minutes gone thanks to Alister Leek.

Having got to within inches of the Newcastle line at the end of the set, the replacement hooker spotted a gap that he dived at from the base of the ruck for a try simply converted by Tom Gilmore.

Attempting to force the game, Thunder were making simple mistakes with the ball in hand to stymie their progress and allow the Bulldogs to keep the pressure on and it was another as Newcastle conceded another penalty for a rip in the tackle that allowed Batley to extend their lead.

Leek was again the man to score as miscommunication between home defenders left him with an enormous gap to jink through for another converted try and seemingly secure the result.

Thunder have been making a habit of late shows in the return to rugby league’s second tier however and when Gill scored his second of the day after skipping out of the tackle, Newcastle’s best period of the match saw them threaten another remarkable finish.

After their prolific centre had his fifth try of the season converted, Newcastle got themselves to within just one converted try away from being level thanks to Jake Shorrocks.

A strong carry from Sam Wilde saw the forward stopped inches short, but playing the ball from the base of the ruck, Woods put in a superb kick angled towards the posts that got in behind the Batley defensive line and Shorrocks won the race to ground

Looking to play their way back up field a forward pass slowed the momentum as quickly as it had begun to swing before the Bulldogs made sure of the result three minutes from time thanks to Tom Gilmore.

Chasing his own kick, the Batley man scooped up a loose ball dropped from an in the air contest of a fifth tackle kick to make sure the points went the way of the Bulldogs.