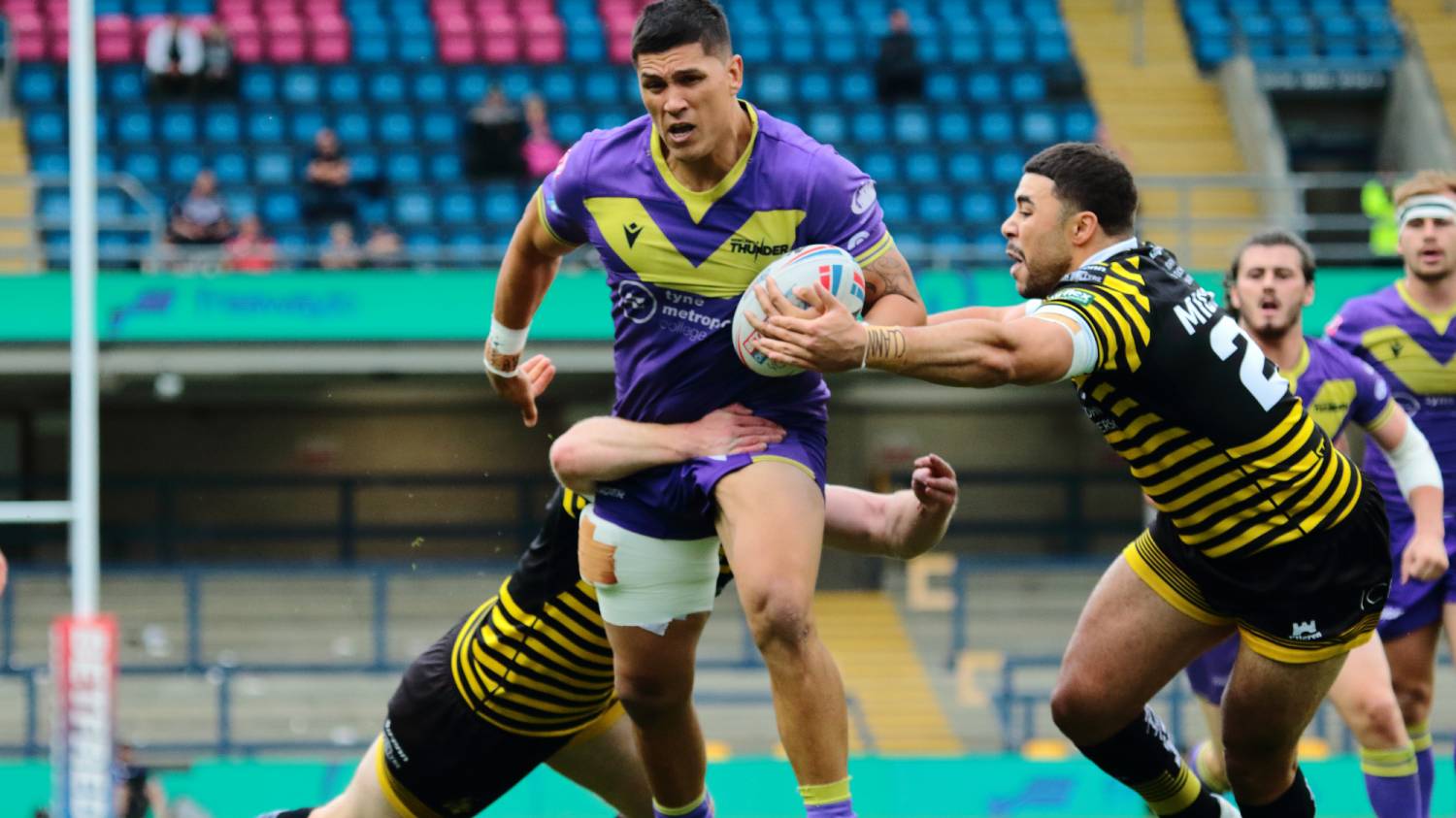 Newcastle Thunder put in a battling performance as they brought the curtain down on the 2022 Summer Bash at Headingley Stadium but a late rally from the York City Knights secured a first win in five for the Minster city side.

Already shorn of several key personnel through injury, suspension and the needs of their parent club, Thunder were further hampered during the course of the game but delivered a much-improved showing over their play-off chasing opponents.

After an even start, the Knights broke the deadlock, if a scrum deep in Newcastle territory. Working the ball wide quickly, York created an overlap to play Joe Brown in for a converted try with eight minutes gone.

Thunder looked for an immediate response and were within inches of a leveller on the next attacking set but had to settle on forcing a goal-line dropout from York.

Frustratingly for Newcastle, they were unable to make the opportunity count as they lost the ball forward during that fresh set, a pattern that would repeat itself twice more as they attempted to hit back.

That breakthrough came on 24 minutes through Ukuma Ta’ai, who made a telling contribution with his first involvement in the game.

Carrying strongly, he charged towards the line from close-range and despite the attentions of two Knights defenders, was able to roll himself in the tackle to ground the ball under the posts.

A successful conversion from Jake Shorrocks made it six-all before the Thunder half-back nudged his side into a slender lead after 27 minutes as he kicked an excellent penalty from 30 metres out.

It was a short-lived advantage as the Knights moved ahead with a near carbon copy of their first try with their second on the half-hour for a lead they would defend up to the break.

An early chance came to nought for Thunder on their first set of the second half as they opened strongly, with the bounce of the ball only just evading Gideon Boafo after a chip through close to the line.

Losing Ellis Robson to the sin-bin after a strong break from the Knights took them to within inches of the line gave up a man advantage that York exploited to devastating effect shortly after, with two tries in as many minutes taking the Knights out to a 12-point lead.

Fullback Matty Marsh was over first as he positioned himself well in the tackle to dot down as he was brought to the ground before a break in the middle of the park saw York create a three-man overlap from which James Glover finished the move.

With the Knights seemingly in command, a brace of tries on the hour brought Thunder right back into the contest, even after losing Shorrocks to a suspected broken rib.

Stepping up to the playmaker role, Josh Eaves laid on a superb pass as Connor Bailey ran a brilliant line to crash over from short range before Isaac Nokes backed himself to reduce the gap to just two points with a surging solo run.

The home-grown centre broke the line with a neat step as quick hands and a great pass from Mullen set him away, with a cheeky dummy towards the supporting Eaves foxing the Knights defence.

Despite plugging away and some committed efforts from the players stepping up to the plate, the Thunder attack was minus some of its natural edge and was unable to keep the momentum with them, with the Knights taking a big step towards the win with a 72nd-minute score for Danny Kirmond.

The result remained in the balance and Thunder threatened a winning score late in the game but when a penalty for crossing was given up with five minutes to play, York were able to see out the game with a last-minute drop goal adding additional gloss.