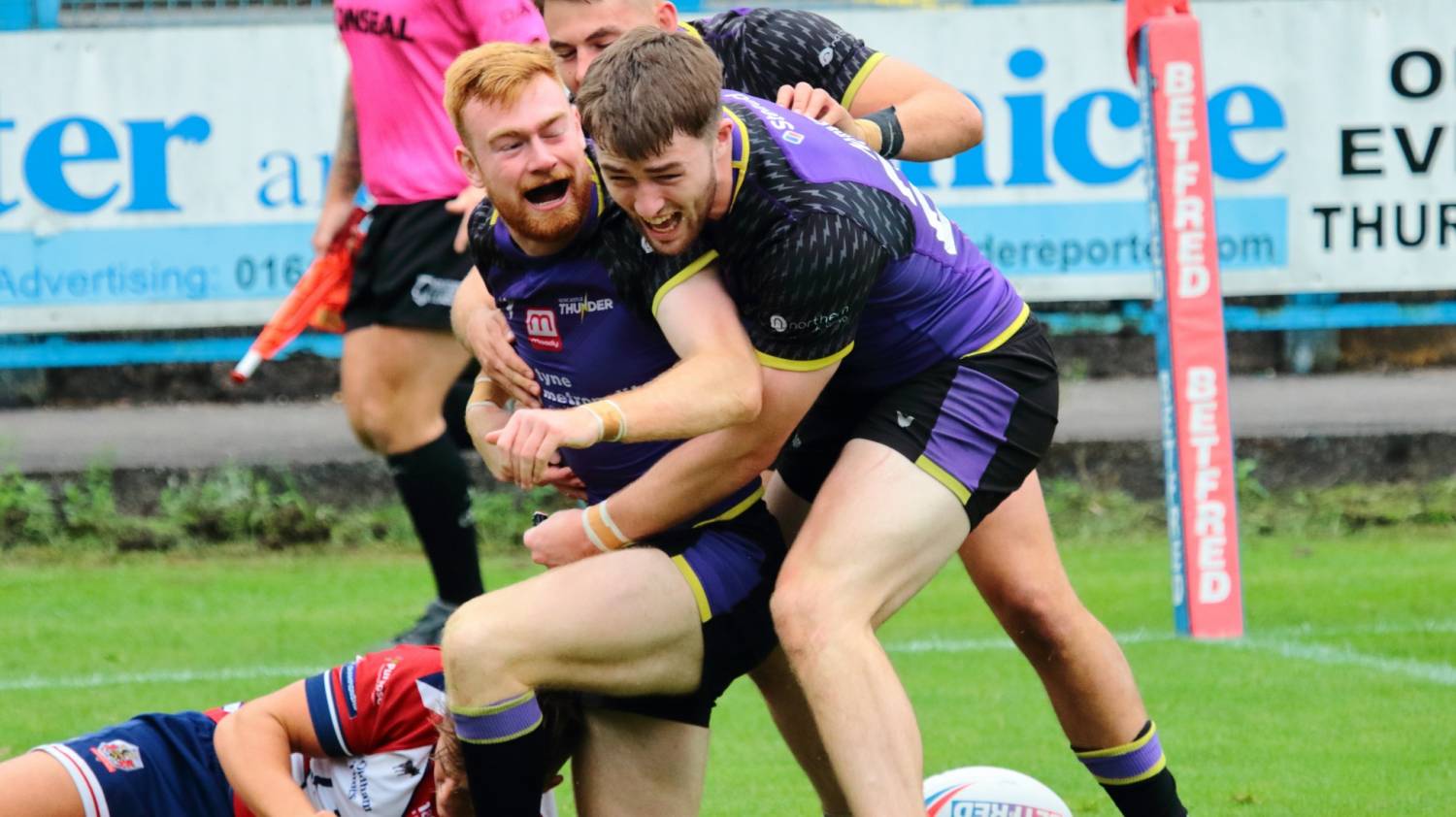 Newcastle Thunder secured a first-ever away win over Oldham RLFC on Sunday afternoon, with a barnstorming start to the second half taking them out of reach of a spirited fight back by the hosts.

Thunder were cruising with an hour played, as five quick-fire scores saw them take a 38-6 lead, but four runaway scores gave the visitors hope of an unlikely victory, before Thunder steeled their resolve to close out the match.

Newcastle were behind after less than a minute after Oldham capitalised on forcing a spill of the ball at the end of their first attacking set.

Having restricted the hosts progress off the kick-off and forcing them to complete on their own 40-meter line, Thunder fullback Alex Donaghy was clattered man-and-ball as he made his first touch.

Losing possession, the hosts scooped up off the floor to cross under the posts for a fortuitous converted try for  Lewis Charnock.

Oldham continued to probe Thunder’s defence after, but despite attacking at pace we’re unable to find a further breakthrough.

Having worked their way back into the game Newcastle ended the half strongly with two tries in eight minutes giving a them a six point lead at the break.

Josh Woods made the made their first impression on the scoreboard with a dummy pass opening up the gap for him to ghost through, before Ukuma Ta’ai carved through a gap created by quick hands seven minutes from the break.

As at Kingston Park earlier in the summer, Thunder proved an irresistible force at the start of the second half as they tore through the Oldham defence with ease.

The roll began after back-row Connor Bailey leapt highest to score off a superbly placed kick in field from Woods, before the half-back’s boot created the next for Kieran Gill, as the centre latched on to a well-weighted grubber for his 14th try of the season.

The clubs’ future saw Newcastle continue to carry their momentum with the next three tries coming courtesy of home-grown talents from Thunder’s academy ranks, who have shone on their outings in the first team this season.

Centre Isaac Nokes was the first to cross as he broke through from 40m out as Newcastle kept the ball alive on a fifth tackle play, before fullback Alex Donaghy bagged himself a brace.

His first was a simple cutback as Thunder stretched the Oldham defence to create the space, but his second was one for the highlights reel as he finished off more fine work from Woods.

Breaking the line on half-way, Thunder’s number seven had the choice of five supporting runners to lay on the scoring pass to, ultimately deciding to go to his right with the man from Morpeth gliding in to effectively seal the result.

Oldham though were playing for pride in their final home game of the season, after being relegated to League 1 last weekend and gave their fans something to cheer with four unanswered tries in the final quarter.

Had they made their kicks, the closing stages would have been tense but with a 14 point cushion to nurse, Newcastle had enough in hand to seal the result.